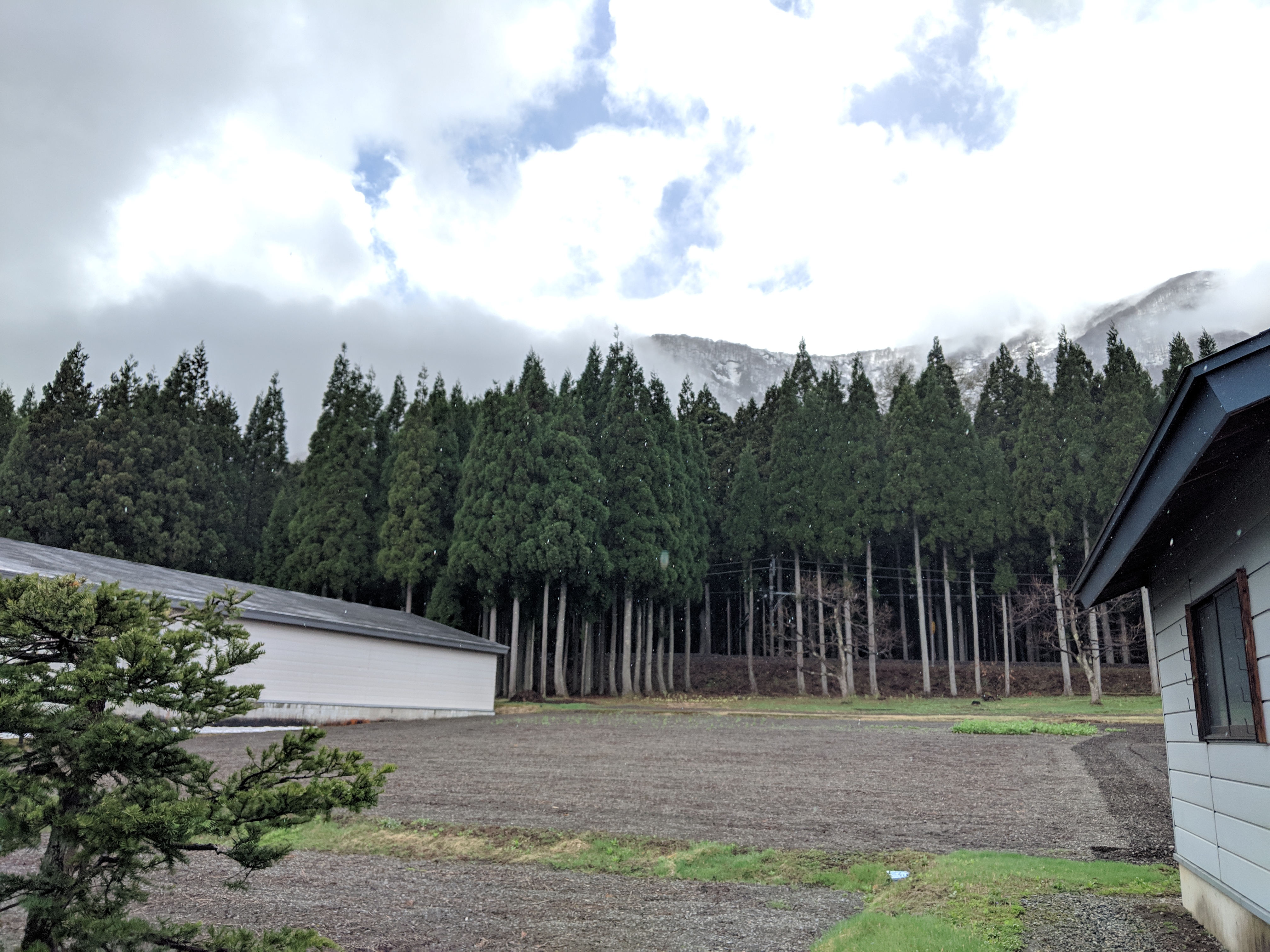 Next day we woke up at around eight in the morning. We had not planned anything for that day as well. After seeing the Happone mountain, the thousand-year-old shrine and the lonely and scenic riverbank, our expectations from Hakuba rose to great heights. Weather was terrific again, there was no rain in the morning and no sunlight as well, but there was a chance of light showers. We referred to the map received from the Information Centre on the previous day. There were many 'Cherry Blossom' spots nearby but the blooming season in Hakuba was over by the time we reached there (and we had already enjoyed Cherry Blossom in full bloom in 'Kitakami'). So instead of spending time in gardens, we decided to go to Lake Aoki, which was about two minutes' walk from Yanaba Station, three stations away from Hakuba station.

We carried the paper map with us, some food (fruits and cakes) and water bottle with us. We both wore a thick jacket and scarf. Our shoes were waterproof and were best suitable for hiking, even for snow hiking. And we left without taking an umbrella with us. 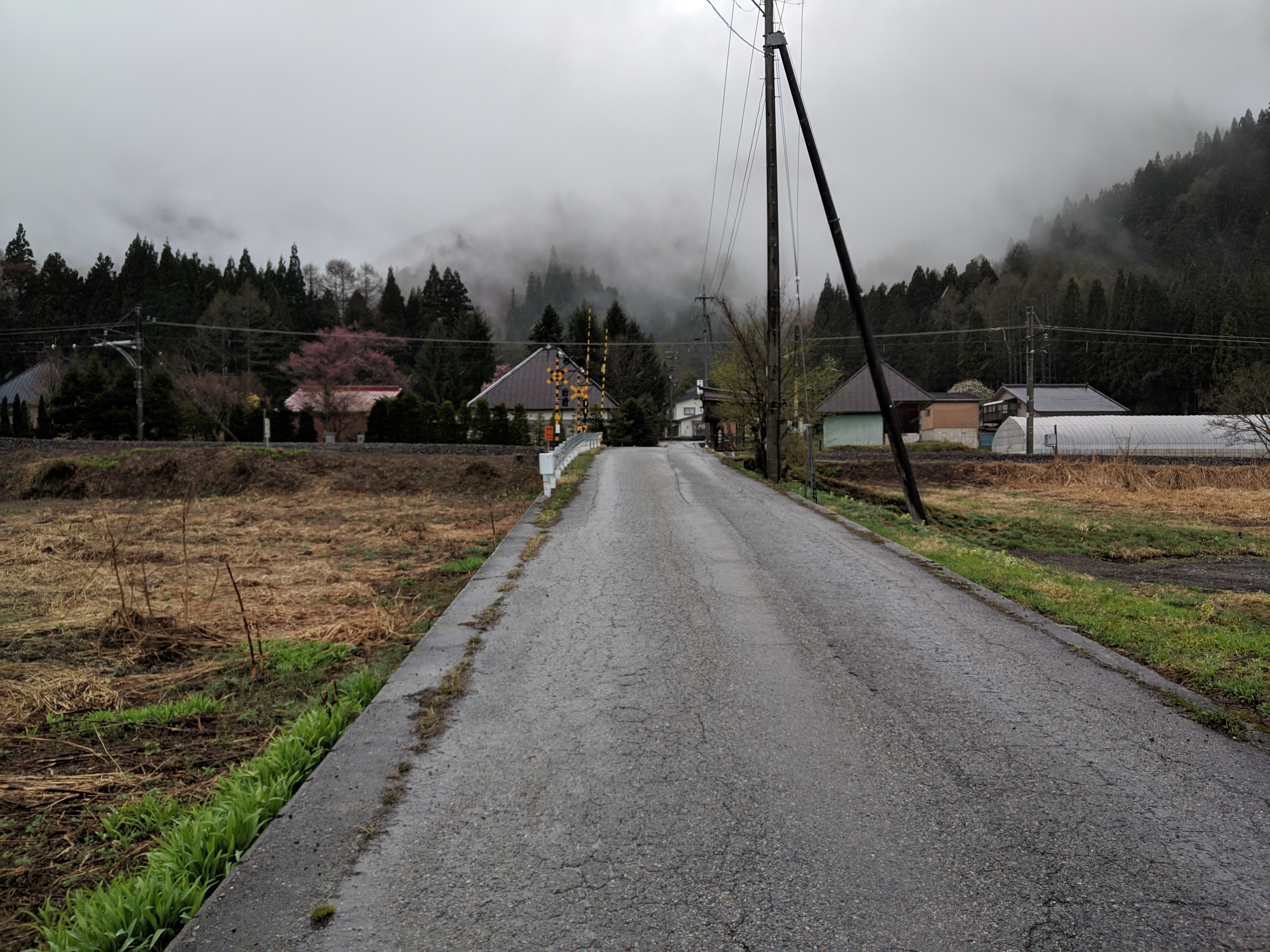 We boarded Minami-Otari JR (Oito-Line) from Hakuba Station. The view from the train was fantastic, we could see small houses, mountains, narrow roads, and farms. Owing to our nature of being little adventurous, we decided to get down one station before Yanaba station and walk towards the Lake Aoki appreciating weather and nature around us. So, we got off the train at 'Minami-Kamishiro' station. It is a tiny station; basically, it is a small, narrow wooden room with glass windows on every wall. There is a small bench kept inside the room, where you can wait before boarding a train. There were stairs which ran down from the station and connected us with the village.

Precisely at the same time we reached Minami-Kamishiro, it had started raining. We sat at the stairs and had fruits and cakes we had carried with us while we waited for some time for the rain to stop. But rains increased with every minute. We regretted our decision of not taking an umbrella with us. We opened the paper map and decided to go (in fact, run) to the nearby Buddhist Temple.  We were unsure whether to take the next train to Yanaba or to go back to Hakuba, get an umbrella from reception and then roam around in Hakuba or to run to the Buddhist Temple. We did not know how to search for a shop to buy an umbrella in Minami-Kamishiro. Next train to Yanaba was almost after one and a half hour, going back to Hakuba would have spoilt our whole day, so we decided to run in the rain and go to the nearby Buddhist Temple. 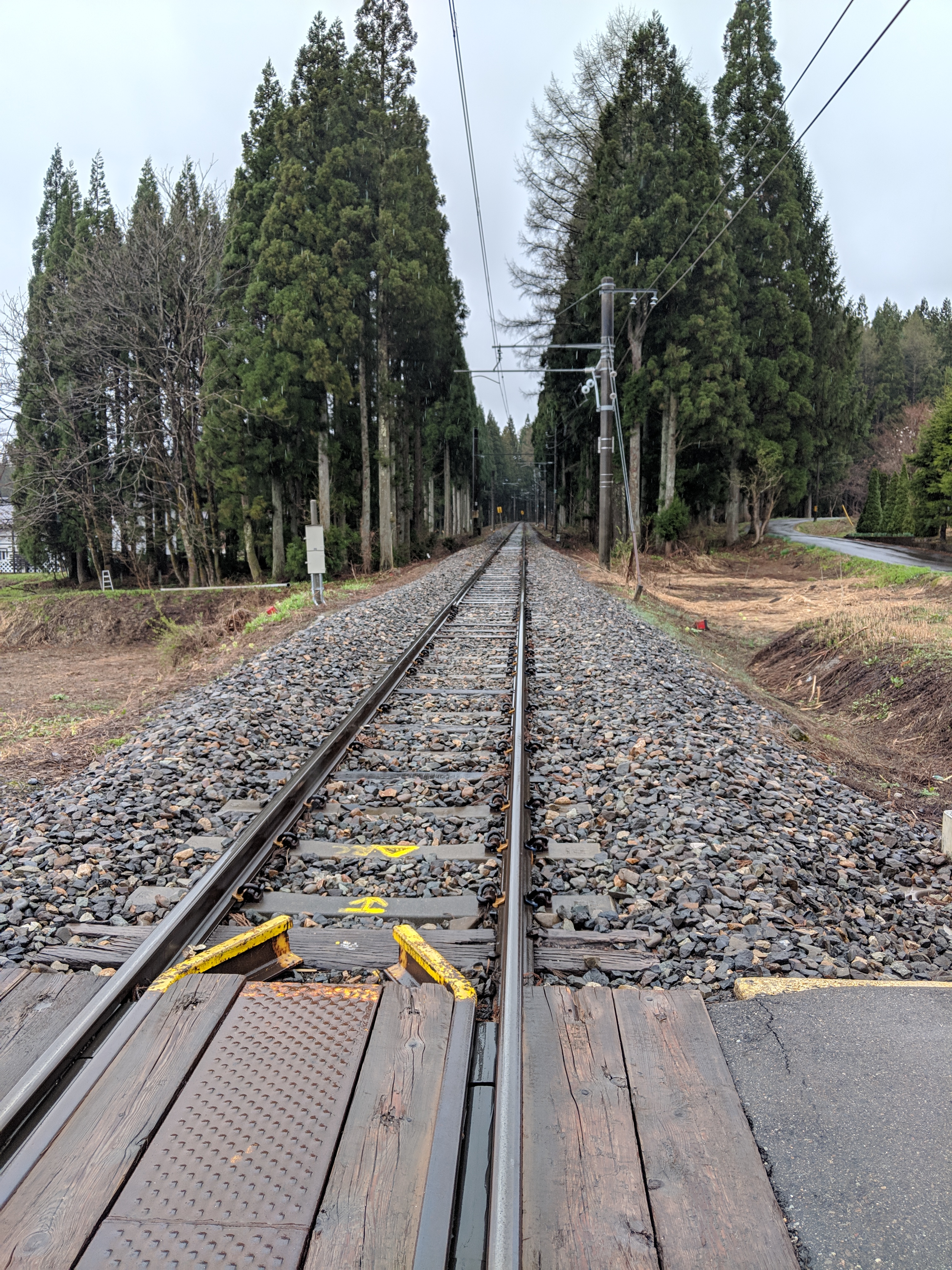 While we were keeping remaining food in the bag and getting ready to leave, something attracted our attention – an umbrella kept at the corner in the station. Well, this is Japan's specialty, every house and, then we learned that almost every station, would have an umbrella kept outside. We carried it with us to the temple. The road to the temple was not as short as we had expected, so our initial idea to cover this distance in just a few minutes was wrong. We saw laborers on the way and then a building, which looked like some company. We wondered whether the umbrella belonged to any of the laborers.

There were many small houses on the way. We even crossed the railway line after walking for some time as the temple was on the other side of the station. There was no single person on the road, there was only one person at the temple, and he too left when we reached there. 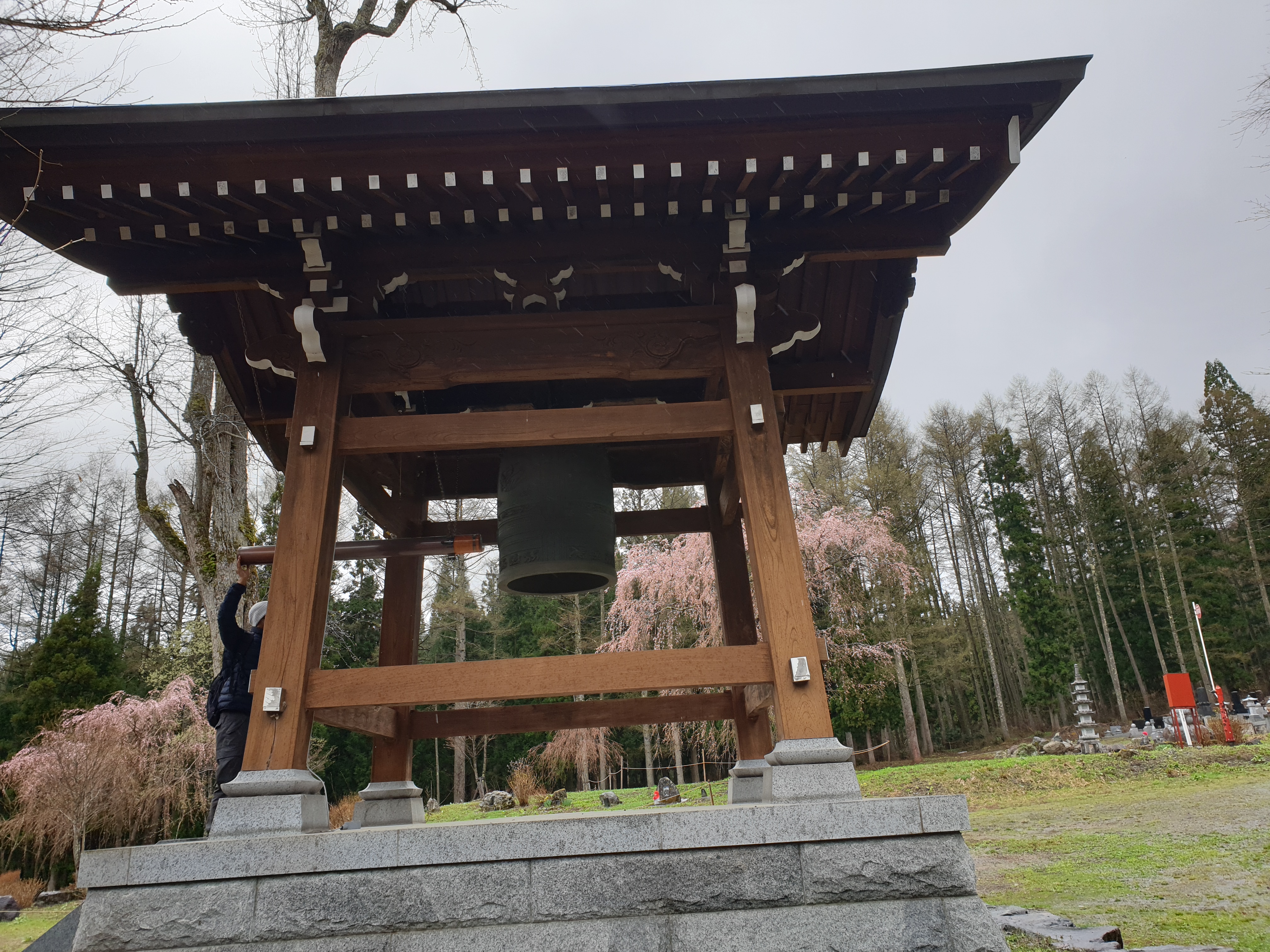 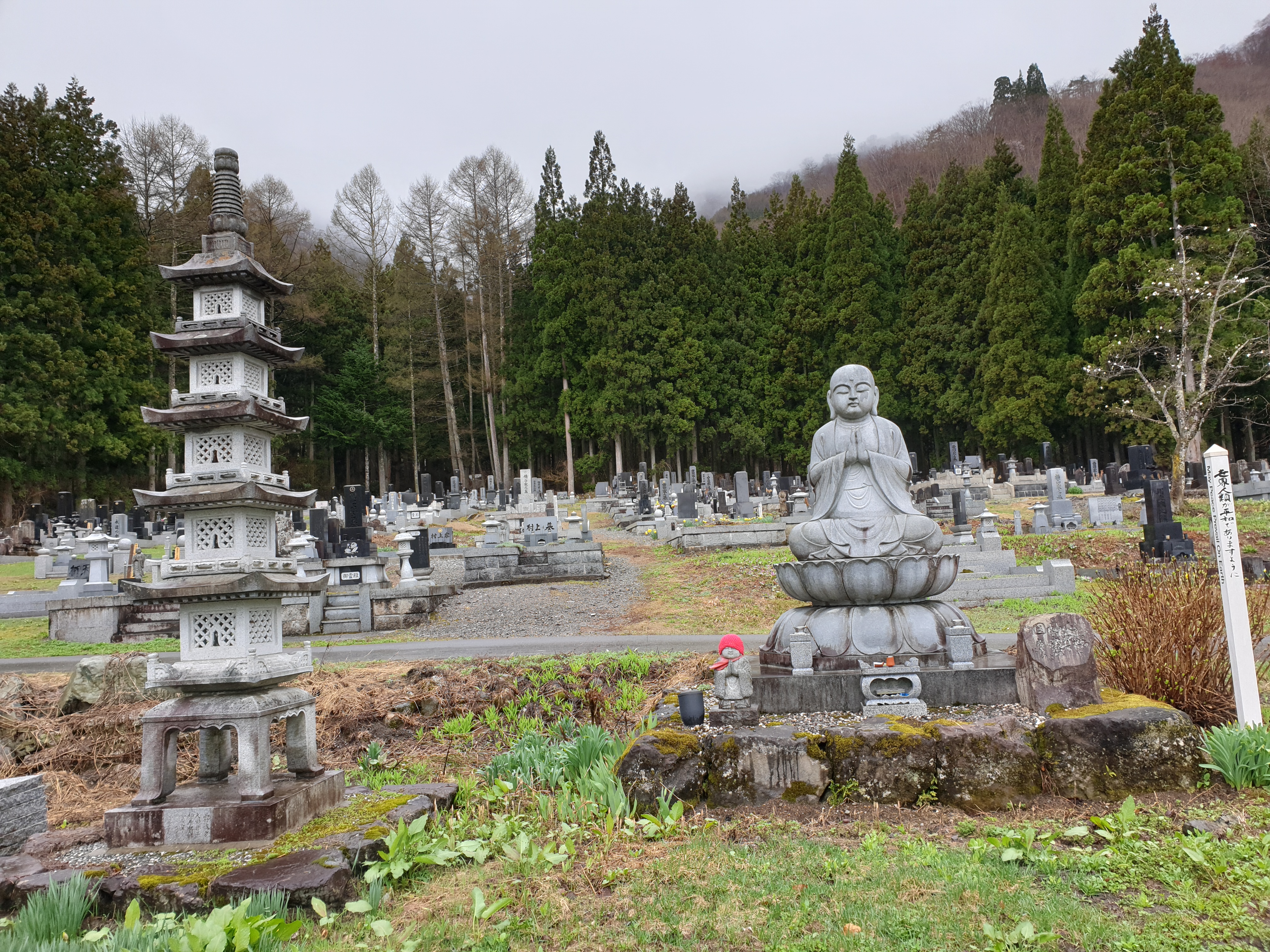 The rain had stopped by the time we reached the temple. There was a small Buddha Status in the ground and then a small tower made of cement. There was a cemetery right behind the statue. There was a big bell, one of the specialties of the Buddha Temples in Japan. There was a wooden platform built for the Bell.  Behind cemetery, the thick forest and mountains were standing proudly. After spending around fifteen minutes in the temple, we started our way back to the station. The rain had stopped , and nature had revealed its beauty in front of us. Minami-Kamishiro was surrounded by forests and mountains from all the sides. The view was breathtaking, and for a moment, I thought of buying a small house in one of these villages and spending the rest of my life here. We took a different route back to the station, which consisted of a short walk through jungles. We kept the umbrella at the station, and as the rain had stopped, we started walking towards Yanaba, Lake Aoki was waiting to see us. Google maps helped us reach Lake Aoki, but the walk was not easy. 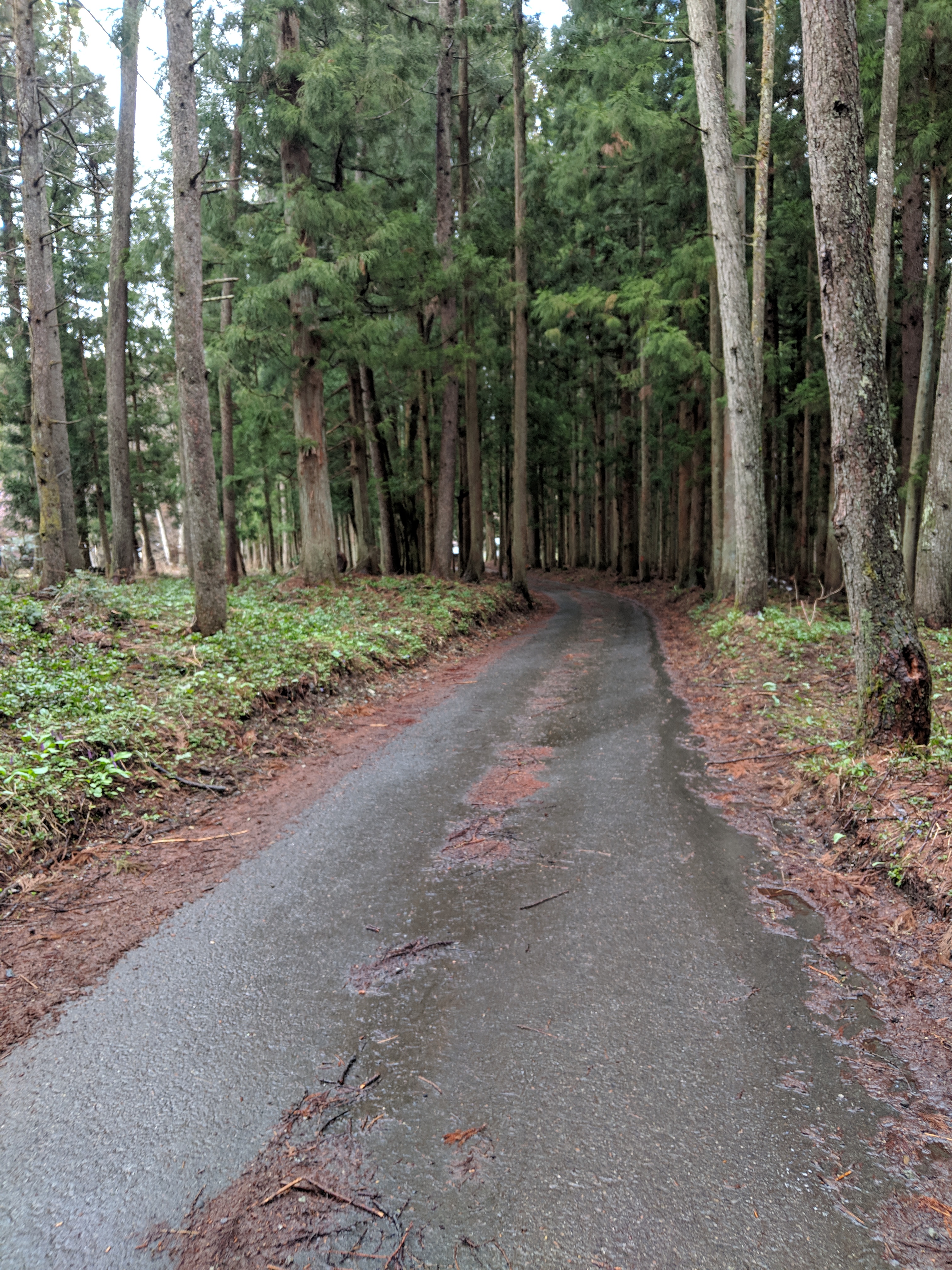 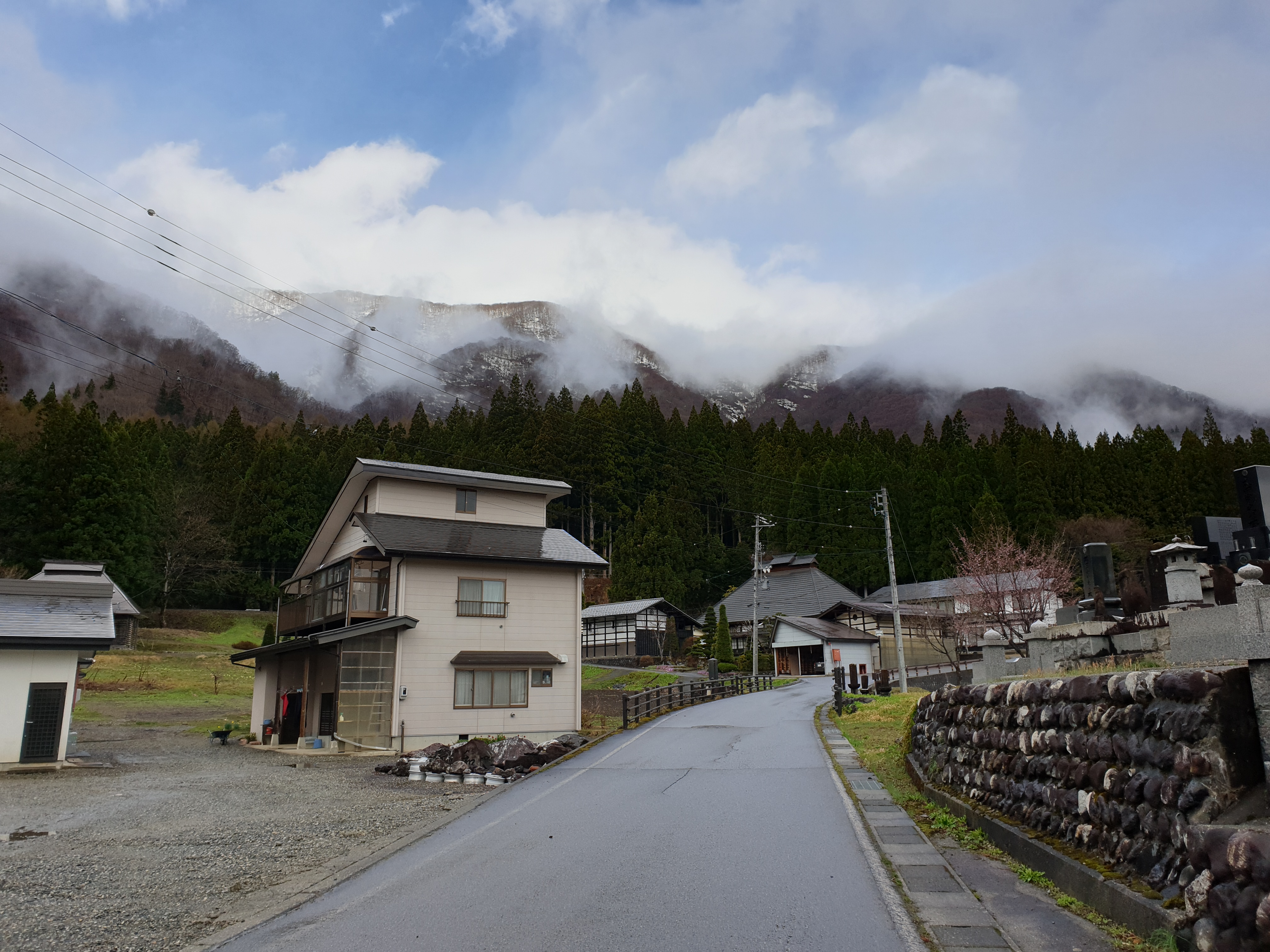 We walked through the village appreciating surrounding beauty; we were in love with Japan. We liked all the small roads, all houses, all small/big ponds, mountains even weather in Japan. We walked for half an hour and then our troubles started.

The route shown in Google Maps was through woods, and we were not comfortable to walk through those thick jungles for a long time. Moreover, there were always very few, almost no people around to help us if we get lost in the woods. We decided to take the alternate route, and we did not realize that the alternative route was a highway until we reached on that road. There was no coffee-shop or any restaurant on the way. There was no footpath to walk on, and all the vehicles were passing-by at a very high speed.  We walked facing the cars and were unsure whether our decision to walk to Yanaba was correct, we could have waited for the train and reached Yanaba safely. We kept walking on the highway for around 20 minutes' without talking much. The view on the highway was awesome too, there were forests on both the sides of the highway and big mountains in the front. 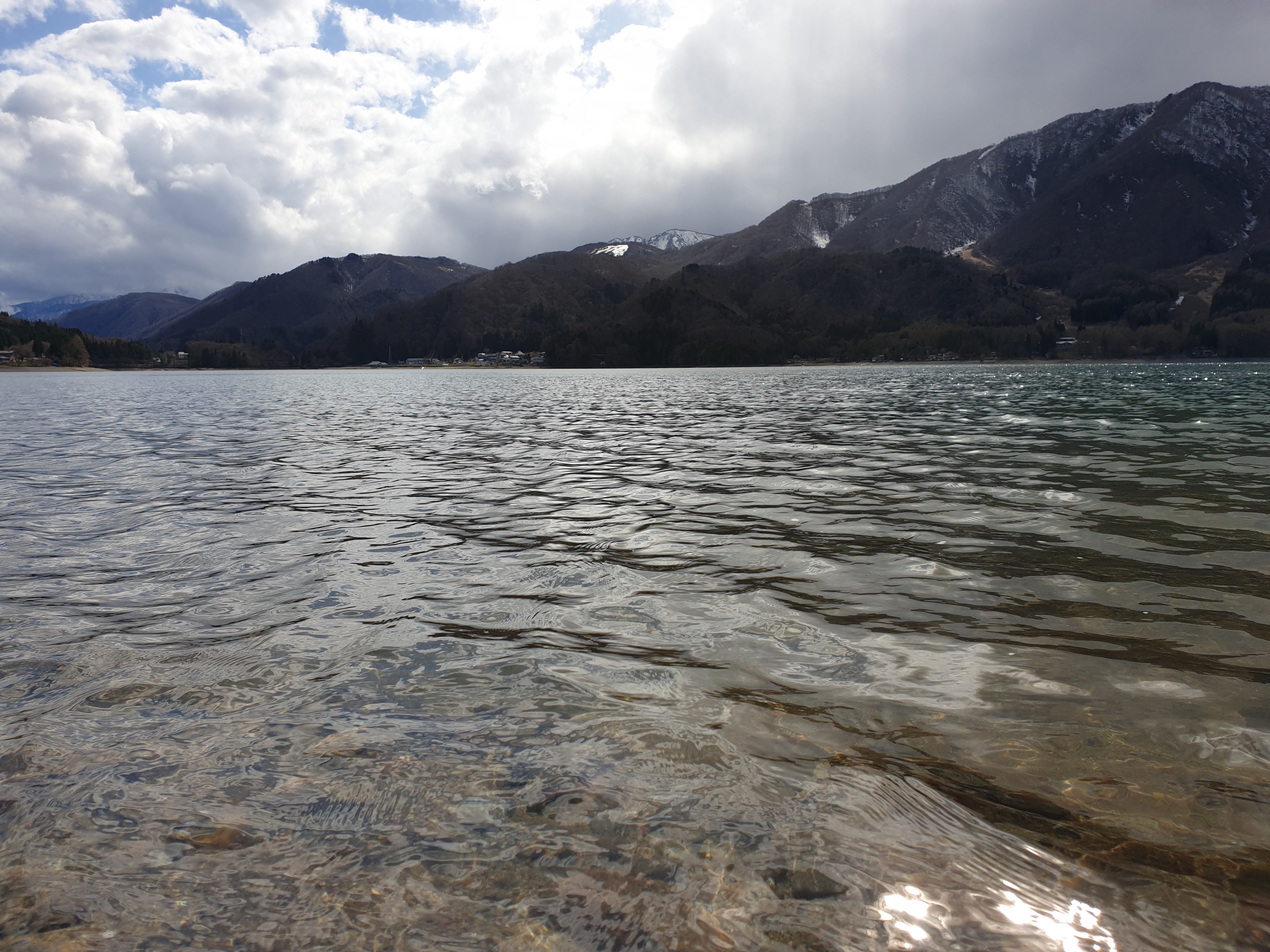 Sky was clear and blue in colour. I and my better-half could not walk side by side as the area available to walk by the side of the highway was narrow, and I lead the path with him walking behind and guiding me. When it was time to take a different route and leave highway, we were both relieved as walking on a wide road where vehicles running with a high speed was not very safe. We took a turn to the left and finally bid goodbye to the highway.

But our challenges were not over yet, after walking for around ten minutes' we saw a tunnel. Google Maps was asking us to walk through the Tunnel. If Google Maps had been a person, I would have kicked him as many times as I could that day. I was adamant not to walk through the Tunnel, though my better-half was comfortable walking in. We waited outside for around fifteen minutes' asking others for a lift, but no car stopped for us. There was no other road to reach Lake Aoki from there. We were afraid to call any Taxi as they would speak Japanese and we would not be able to understand/answer them. After gathering courage, we decided to walk-in. My better-half had figured out that Tunnel was a short one, but as the conclusion was derived based on Google Maps, I did not believe him at all. I made up my mind to focus on the road and keep walking. Fortunately, there was a narrow footpath inside the Tunnel, and we again did not walk side-by-side. I turned on the torch on my phone. As 'Mr. Always Right' had said, the tunnel journey was just two minutes' walk. When we came out of the Tunnel, there was Lake Aoki on the right and a small restaurant on our left.

We first went to the restaurant and had a coffee and Gyoza (pork dumplings). There was a view of Lake Aoki from the restaurant. The journey we had made to reach there seemed worthwhile, just after the first sight of the Lake. After we had our food, we left the restaurant and went to the Lake. As always there was no one around the Lake which was bordered by the mountains and trees. There was little snow in the mountains. Sun rays were intermittent. Colour of the water in the Lake was Aqua, a magical combination of blue and green. Clouds were sitting at the top of the mountains.  There was mild wind, and we felt fortunate to witness views like these. We sat on the shoreline for half an hour and then walked on a parallel path bordering Lake. After walking for some time, we noticed that trees, some dried and some with green leaves, had started appearing on the other side of the Lake. 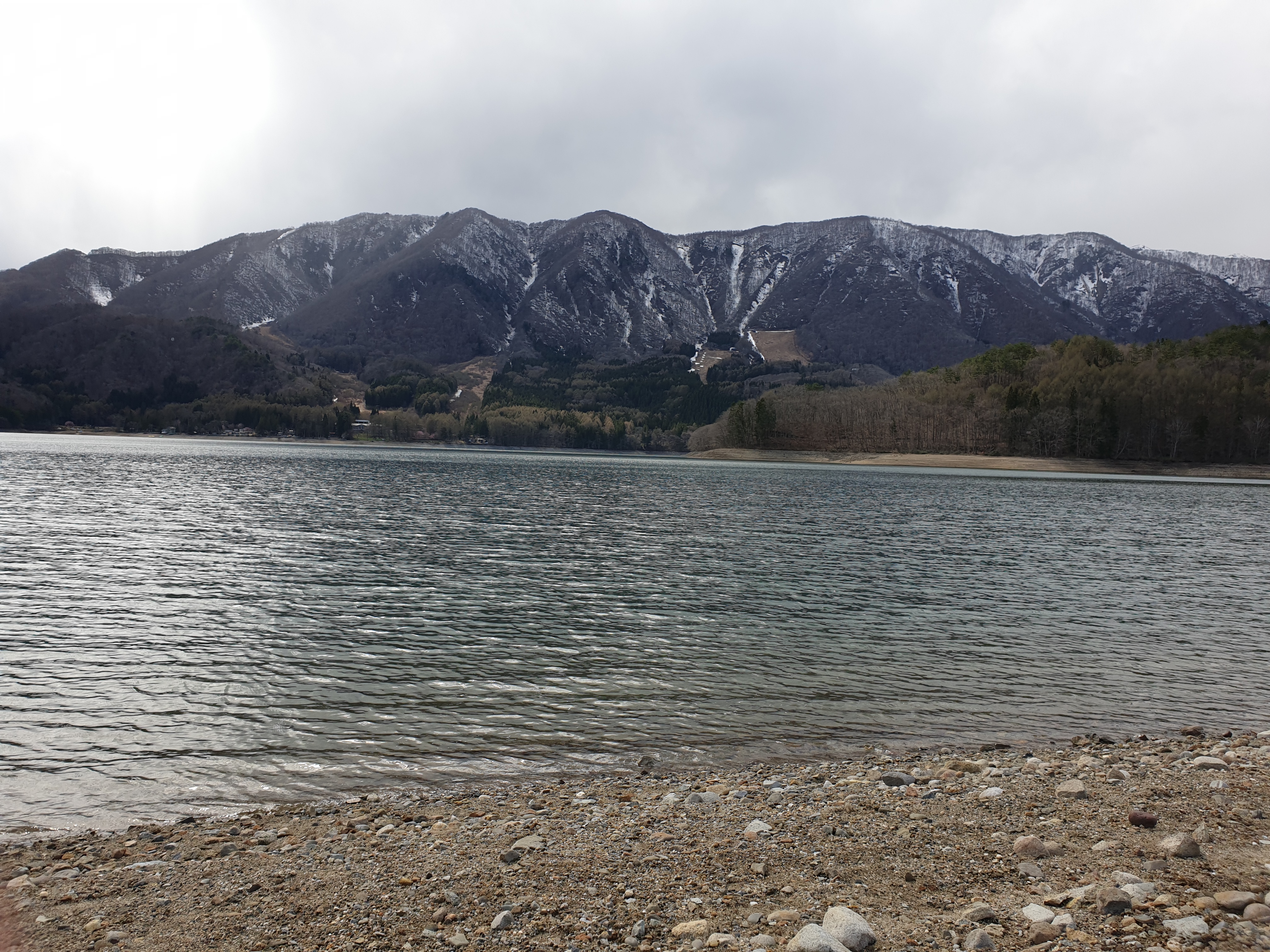 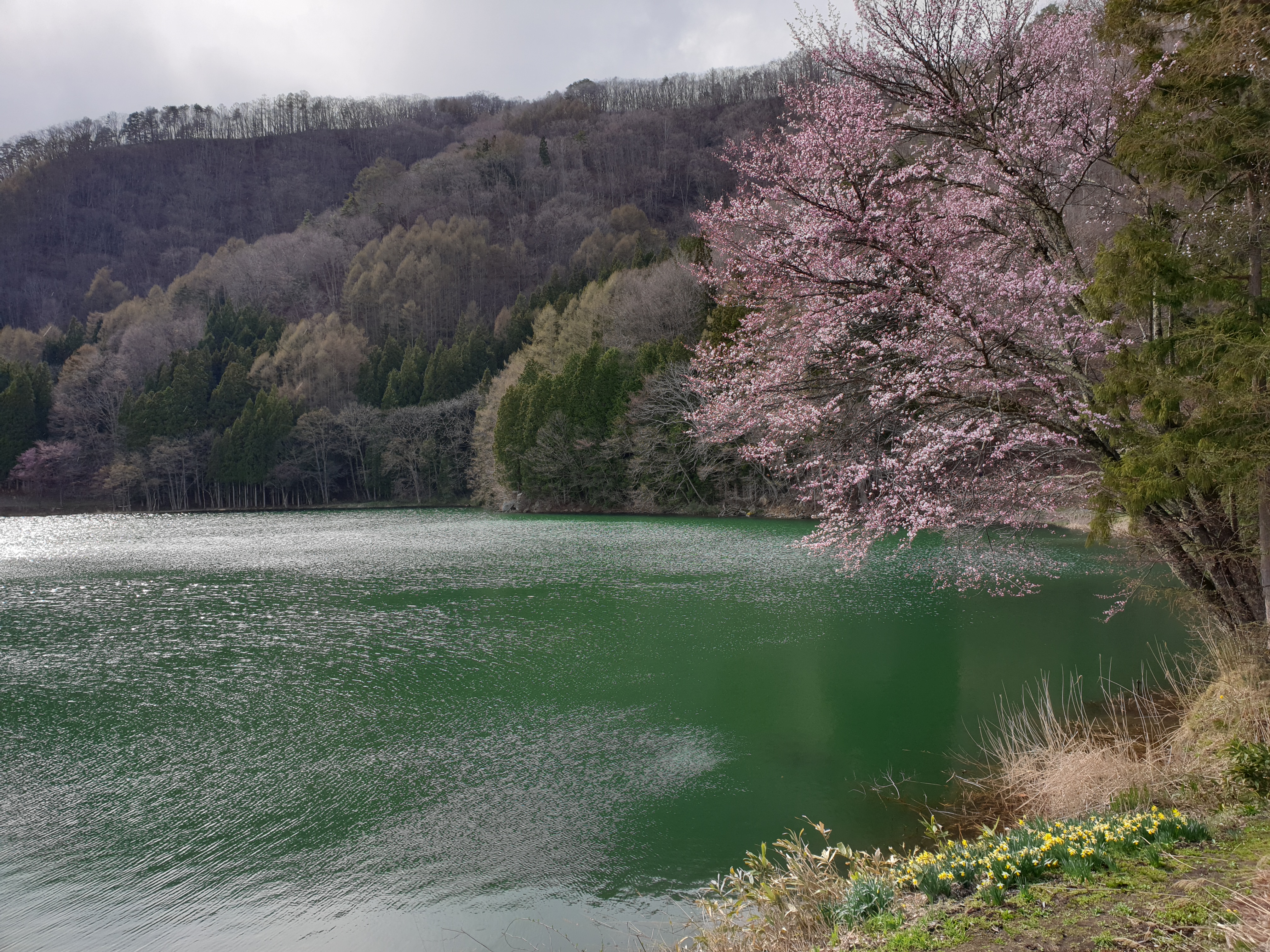 There were some farms around, and the view was again magnificent. Lake Aoki is big and needless to say clean. Certain water sports activities (Canoeing, Kayaking) are carried out in Lake Aoki. But all the water sports centres were closed when we were there. After appreciating Lake Aoki's beauty, we headed towards Yanaba Station. This time, without a doubt, we decided to take a train back to Hakuba. On our way to Yanaba Station, there was one more Lake, Lake Nakatsuna. Nakatsuna is a small lake but, again, with pretty clean water. Our day was made by the challenging journey and lonely roads. 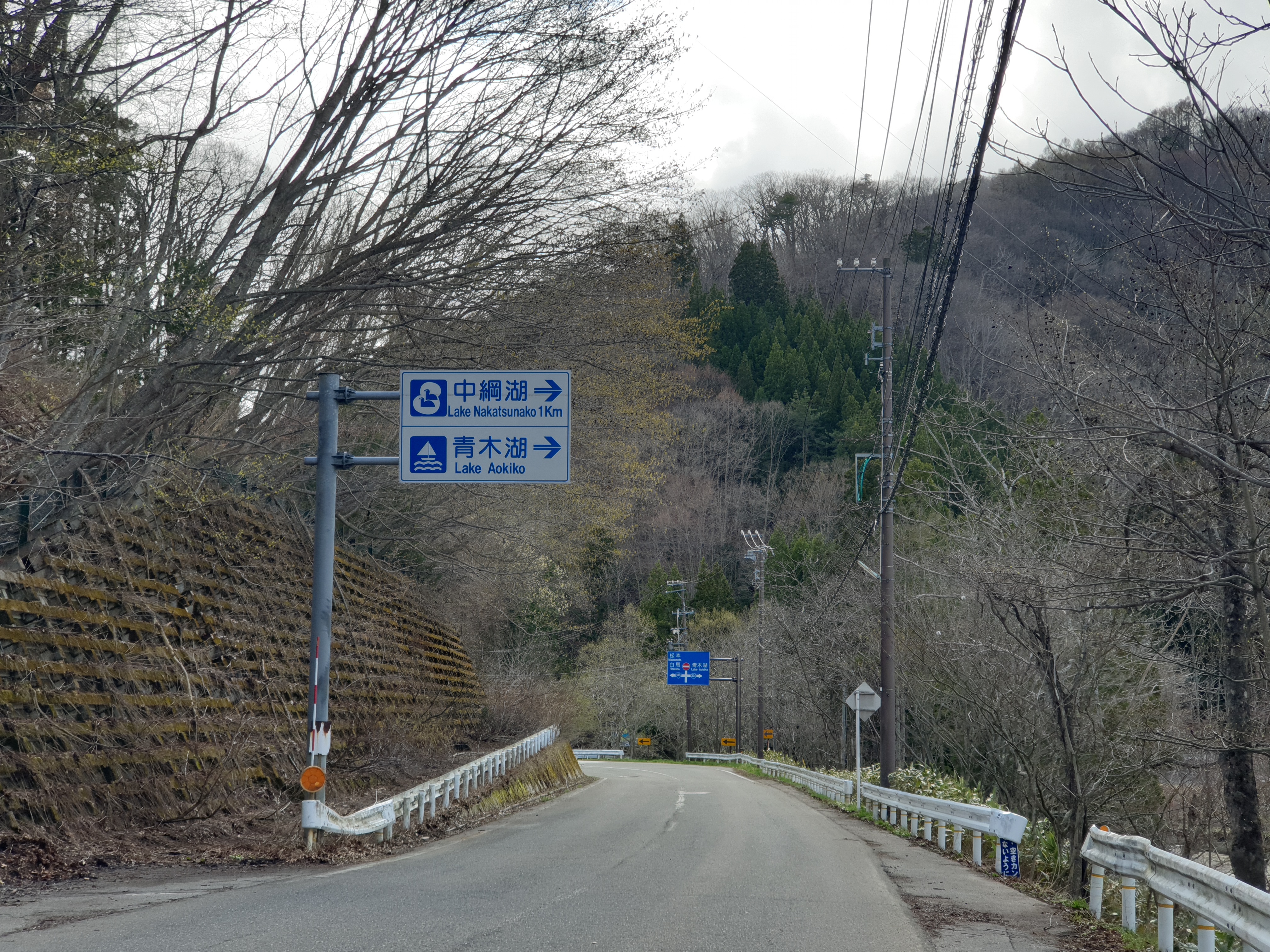 We bid goodbye to Lake Aoki when we grabbed our seats on the train. The train showed us the glimpses of the lake again. I wished I could capture those moments forever in my eyes. When we reached home, we cooked food at home (thanks to Airbnb) and then went out for a walk. The Mount Happone was visible from our room's window. Though in the night we could not see it, we realized its presence every moment.  We had long talks that night, and the topic was the un-ending beauty of Japan.

Japan helped us get one more step closer to nature, and it is truly a MUST VISIT place for all 'Wandering Souls' like us. 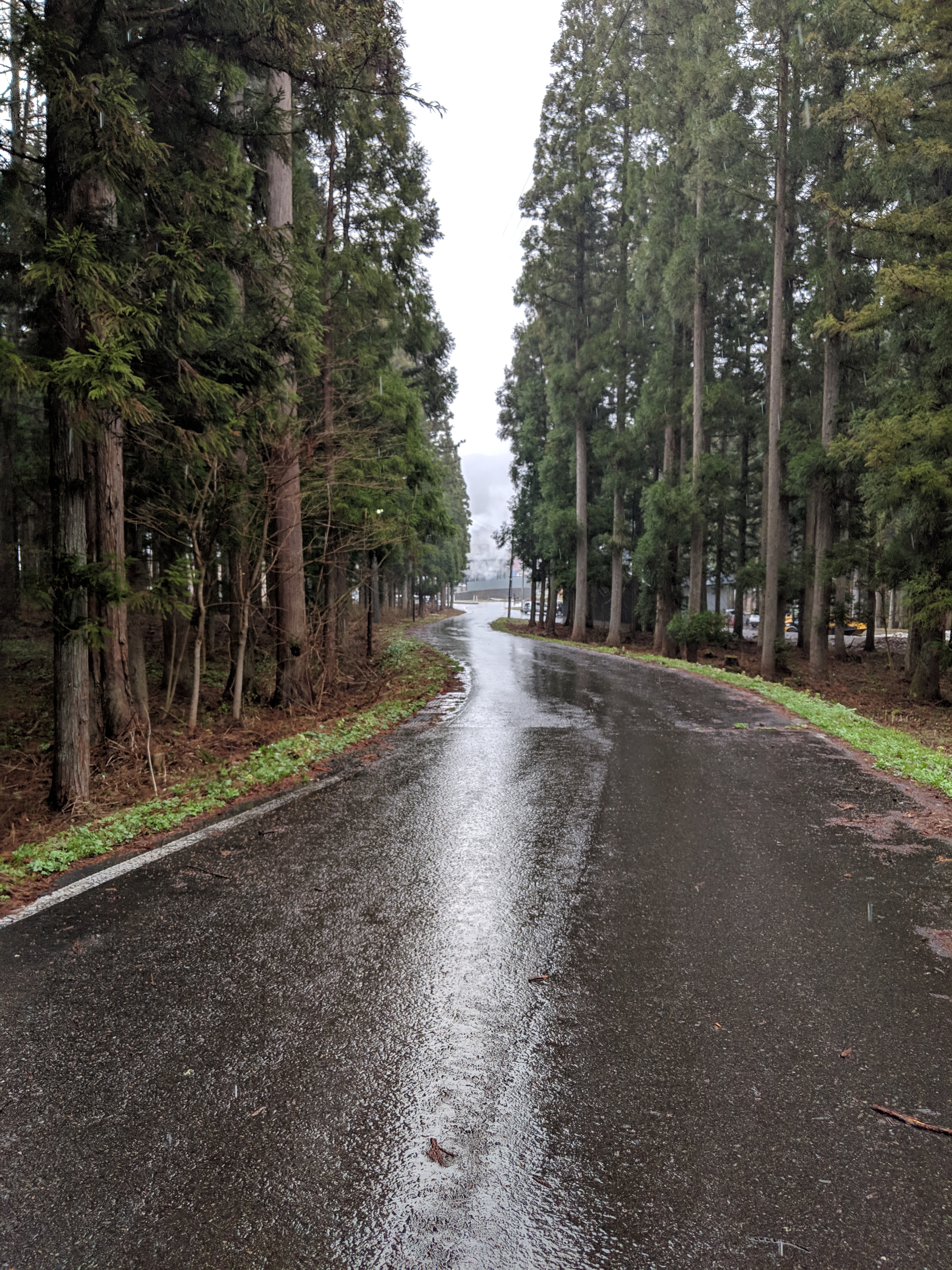