Apeksha woke up to the sound of an Alarm clock; it was around 7 in the morning. While she was getting off the bed, she realized that there are lot many things to take care of before leaving for the office. She listed down, in her mind, the things to do. She selected the dress which needed no ironing so that she could save some time. The morning was spent in completing her to-do list. She cooked lunch, loaded dirty clothes in washing-machine & made tea and breakfast for herself and her husband. She left for office around 9 am. On her way to the office, she realized that she had missed inquiring about a dance class she was thinking to join since a month. It was in her to-do list every day, but she somehow could not prioritize it. That day, she decided to call the dance instructor as soon as she would reach office. She planned to go to the beauty parlor over the weekend as it was challenging to get enough time over the weekday. She also decided to buy some sprouts & green tea bags in the evening on her way home so that she can follow a proper diet she had been thinking to develop for a few weeks. She then thought about cleaning the house in the evening and chose to take her husband's help as it was a time-consuming task. The second to-do list was made and signed-off by her, in her mind, by the time she parked her moped in the company's premises.

As soon as she reached her desk, thoughts about the things to work on in the office crowded her mind. When she logged-in to the system, she saw that there were three meetings that day and she had to submit some documentation on priority. Owing to her nature of dedicatedly working on her tasks in hand, she started her day in office with enthusiasm.  By plugging-in her earphones and adjusting her chair to sit comfortably, she got ready to conquer her small corporate world that day. In some time, Rohan, her colleague sitting on the neighboring desk, invited her to have some sweets he had brought.  She picked up one, congratulated him, and smiled at him. Apeksha knew why Rohan was distributing sweets. Rohan was getting married, and she knew that his fiancee was going to leave her job after marriage, not because she wanted to but because their families thought that the girl need not work after marriage as Rohan was earning enough.

These thoughts used to upset Apeksha, not because she was a careerist. But because she had fought hard to save her career, and she had sacrificed many other things to have a good personal life. She could strike a balance between her personal and professional life, but she knew that it was not easy. It was a battle which went on for a long time, and it took a lot of determination and patience. After working for an hour, she got up from her place and carried an empty bottle to the pantry to get some water.

While she was looking outside through the window, the dormant thoughts of her struggle came forward, and her story unfolded in her mind. 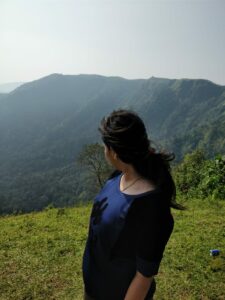 She had come to a different city, leaving her then boyfriend and now husband behind, to have a better career prospect.

They both managed to meet each other during this time, but things changed when Apeksha got married. People started pressurizing her to leave her job and get settled in the same city as her husband's. Her husband was supportive throughout this time, and they both felt that Apeksha's living in a different town, and pursuing her career was important. She knew she would have a better job and a better life where she was living, she continued working. After marriage, her husband always traveled to meet Apeksha, but he could not settle in the city she was in as he had his own business in the other town. Many people could not tolerate the financial independence Apeksha had, and they started taunting her. Despite working hard to make her career, taking efforts to grow and secure a better position, earning respect and self-confidence in all these years, she was helpless when her relatives mocked her and used harsh words for her. Neither did they value her sacrifices, nor did they appreciate the position she had in her organization and society. They wanted her to be at home and follow the status quo, but Apeksha was not ready for it. When there was resistance, she worked harder than before. Apeksha's relationship with her husband went through many ups and downs, but she was stubborn and was not ready to leave her career. Resistance increased with time, impacting Apeksha's mental health. Months passed by, and the situation did not change.

Then there came a time when her husband had a downfall in his business. Despite the problems created by other people, they were both strong together. Apeksha not only helped her husband to recover from losses but also provided him the necessary mental support.  That was the time when Her husband realized that Apeksha was right in being financially independent. And she was right in thinking that her career was as important as his. Her stubbornness to work and not to be a housewife helped them sail the boat of their relationship. She was there for him when the whole world turned him down.

A smile appeared on her face when she realized that her patience and determination had helped her in securing the kind of career she always wanted. She went to her desk and got engrossed in her work. After spending the designated 9 hours in the office, she left the office for the day. On her way back, she realized that she had to buy sprouts for her dinner. But the heavy traffic made her take a different route, and in the thoughts of avoiding traffic and reaching home safe, she forgot to go to the grocery store. After arriving back, she cooked dinner and decided to sleep before 11 pm so that she can wake up on time the next day morning.

She did not call dance instructor that day, neither could she have a sprout dinner. She did her best in office and at home where she cooked a delicious meal for her husband. She enjoys going to office as that is the platform where she meets people and discusses various topics.

During the last eight years, she has learned that it is not easy to grow in a Corporate career. She has learned that women are stereotyped for not being attentive at the office. People think that women are less likely to have a good career, especially after having kids. In the past, she did try to prove to such people that she had and would always have a job. But later she realized that it was not the right tactic. She learned that the right approach is to keep going, keep working hard, and not to give a damn about such people. She has also learned that in the process of proving us to the world, we should not take unnecessary stress and pressure. With her experience of all these years, she is now confident about herself. And her mantra is not to worry about what others are thinking about her. She does what she thinks is right. She spends usual 8-9 hours in the office, and when she leaves office, she leaves thoughts about work behind. When at home, she gives time to personal life and so-called 'to-do' list.

Despite being good-natured and soft-spoken, she is bold enough to take right and tough decisions. She had taken risks, which a majority of people would be afraid to take. Apeksha is an example for all of us as she is determined to do what is right for her – without thinking about what society says!!